Where are you right now?

“If you ask people to imagine winning the lottery,” Dr. Gilbert says, “they typically talk about the things they would do — ‘I’d go to Italy, I’d buy a boat, I’d lay on the beach’ — and they rarely mention the things they would think. But the data suggest that the location of the body is much less important than the location of the mind, and that the former has surprisingly little influence on the latter. The heart goes where the head takes it, and neither cares much about the whereabouts of the feet.”

The study that produced the above quote found that those people who focused their minds on what they were doing in the moment were happier than those whose minds wandered. And, we live at a time where we have been acculturated to mind wandering... to your phone, laptop, TV screen, to the unfinished conversation or the difficult conversation that hasn't occurred yet. 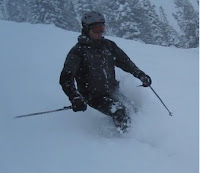 I notice when I am mountain biking down a steep hill that it requires 100% of my concentration. Same with a challenging mogul run. And, there is nothing better in the world! For me, "rest" often has more to do with "giving my mind a rest" than "giving my body a rest". And, when I am in an activity that requires 100% concentration, regardless of the physical exertion, I come away feeling rested. And, happy.

So, where are your thoughts right now? What do you do that requires 100% presence?

In the week before the California Governor's election, a campaign typified by particularly bruising negative attacks, both candidates for governor were appearing together and asked if they would take down their negative ads.

Jerry Brown, the former governor who was ultimately elected said, "If Meg wants to do that, I'll be glad to do that."

And Meg said, "I will take down any ads that could be even remotely construed as a personal attack, but I don't think we can take down ads that talk about where Gov. Brown stands on the issues."

So, who gets the gold star for clear communication today?

Sadly, not re-elected Jerry. While Meg got booed for her remark, Jerry was lauded with praise. But what did he really say? Look carefully.

He played a classic move of political non-speak. He could have said, "I want to take down the negative ads." Or better yet, "I will take down all negative ads. Meg, will you agree to that?" But he didn't say that. he said, "If Meg wants to..."

And, sometimes I don't get what I want.

MAN SAVED FROM HIMSELF

"A Metro-area area man was rescued this past fall from himself. Sources close to the incident said that a business executive was buried alive in his own past for decades. Astonshingly he didn't even recognize it until recently. A near crisis situation was avoided when an unidentified California man known only as "The Guy" assisted in providing a shovel that allowed the man to dig his way out. The executive is recovering nicely and expected to make a full recovery by finding his own life."

What would be the headline for your life today? What would the one paragraph summary have to say?