My favorite was a simple turkey sandwich with cream cheese and cranberry sauce at a funky little shop in old town Tustin.  Over the course of ten or eleven years that's what I had when Mel and I met for lunch.

Mel owned a machinery business in Santa Ana and I loved watching it work.  They made small parts for airplanes I think.  I remember he offered math and english classes for his employees which was an unnecessary yet meaningul thing to do back in the day.  At lunch we would talk about his business and how it differed from the work I did.  He impressed upon me the importance of meeting market demand... "if you turn someone away you create competition for yourself because someone else will meet the need".  Funny the things we remember.

He was a dad in the Y's Indian Guides and Indian Princesses program.  As a young buck program director I remember more than a few enjoyable moments around the campfire.  Mel was part of a group of dads who played a subtle yet extremely competitive game of "one-up" when it came to camp cooking.  Some of the best steaks and shrimp came off their BBQs accompanied perhaps by a fine glass of Zinfandel.  Or two.

Mel took it upon himself to stay in touch even after his official role as the Y Board chair was completed.  He reached out and found me at odd intervals, always making it seem like the most natural thing in the world.  He showed me a respect that was not deserved at 25 and 30 years old.  Somehow, I always had the sense that Mel "got me."  Along with a handful of others, he was instrumental in my early successes not so much by what he did, but how he was.  He never took it all too seriously.  He held things with a lite grip.  He would come with Cheryl to whatever events we cooked up and was a steadfast supporter.

And, like many mentoring relationships, my time with Mel came to a close as I moved to a new position in a new city.  Life moved on.  And, but for a chance meeting at the car wash along the way, I haven't connected with Mel in nearly 20 years.  But his presence in my life lives on.

And now, this.  Mel's life was taken yesterday by a young man on a rampage.  The young man later took his own life as well.  Mel was simply on his way to work early, like always.  We will certainly learn more about the young man's life through the lens of his death.  And, we'll be shocked and saddened.  My guess is we will hear a story of isolation.  A young man in turmoil.  No one to turn to.  A young man not truly known by anyone.

And the irony of it is that Mel was the kind of guy that reached out to ensure that young people were known.  That young people were welcomed into community.  Given respect they didn't deserve.  He did it with me.  He made it happen for thousands through his support of our work.

My hope is that the story of Melvin Lee Edwards life will be remembered as a guy who knew people.  A guy who cared.  And, my hope is that Mel's life becomes even more instructive to me on the importance of reaching out.  Of connecting.  Of giving respect to those who may not deserve it.

He wasn't perfect.  None are.  I'll forgive him for that just as I forgive myself when I fall short.  And, I'll remember Mel as a man deserving of my respect. 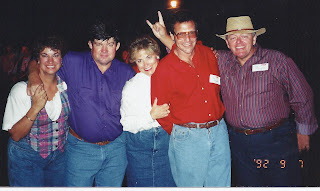 For years, I lived multiple lives... I had my work life and my home life.  My inner life and my public life.  I spent a great deal of energy managing all my lives and ensuring that I showed up just right in each one.  People that knew me twenty and thirty years ago have told me that they never really knew me... that they always sensed they were getting just a part of me... and they were right!

For several years now I have been shifting to a "whole-life" view of things.  It seems that I really am just one person and the more I can look at myself as an integrated whole the more energy I have to simply be me... as opposed to managing the story of me.

One tool I use at the beginning of every meeting or retreat that I facilitate is called the "Whole Life Check In". At first some are reluctant to peel back and reveal the layers of their life but in the end almost everyone appreciates the few moments of permission to reflect on themselves.  No one ever shares more than they want to share and I have found that in even the most task-oriented business setting that starting this way focuses first on "who we are" so that "what we might do together" becomes stronger and more effective.

Click on the Whole Life Check In link here to download the one-page handout.  In some ways I use this every day.  What do you think?