How would you play the hand? 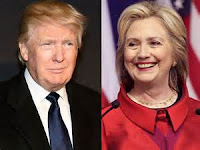 I was thinking about the world of political theatre that we are all witnessing at the moment.

What if Trump is playing this game as if it were a season of Survivor? Or, what if he were coaching someone to "get the job" on his reality TV show? How would he coach them?

First. Set the outcome. In this case, get the nomination. Not the election yet, just the nomination. On Survivor that would mean eliminate the field. Do whatever it takes to clear out the competition. Check. And then, strike the emotions of the disgruntled Republican voter. Go after anyone the disgruntled voter can vilify in order to become their hero. Ethnic differences and illegal entrants were slam-dunks for this. So is anything that will bring a sense of security to an unprepared near-retirement aged individual (read "baby boomer"). Check and check.

So, let's assume he gets the nomination. First objective achieved. Good job.

Then on to the general election. Objective: Get the job. Win the electoral vote.  Is it the same strategy? Vilify Hillary? Make promises to the disgruntled? I don't see that. The disgruntled, un-prepared, insecure electorate are on both sides of the aisle.  So what's the strategy? How would Trump coach someone here? Who needs to be persuaded? The pundits would say "look to the swing states." So then it becomes a vote counting exercise and crafted message to the specific target market at a precinct-level campaign. We'll hear all kinds of speeches and gnashing about but the general election can be predicted by the voting of incredibly narrow bands in specific States.

My sense is that Trump will prevail. He gets the game. And to him, it is a game.  We're seeing it already as he softens his rhetoric and reinvents himself.

And, it gives me guidance on the good question when contemplating how to navigate any issue!  "What might the other side be thinking?"  or "How would you play the hand if it was you?" might help me see any thorny issue with more clarity.

Close your eyes for a moment and get in the helicopter with me. We'll only go up a couple hundred feet and just hover there.

When we're able to get honest about how we are judging or assessing ourselves, the door opens to accept ourselves right where we are. This is the truth of this moment... and it won't always be this way. It also opens the door to learn from those inner critical messages that we berate ourselves with... the "you're really not all that good..." and the like. We all have some version of this and it is in when we detach and take an outside view that we are able to recognize it as simply the critical voice inside.

In any event... maybe today is a good day to go grab a beer with yourself... or an ice tea... and have a little heart to heart.
Posted by Vince Corsaro at 12:02 PM