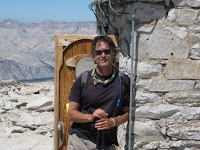 Altitude sickness doesn’t have a linear cause. You can’t say “ah, he was dehydrated and that’s why he got sick…” Altitude sickness hits when the systems are out of whack. It can hit when you’ve climbed too high too fast. It can hit when you haven’t eaten well. Or slept well. Or hydrated well. Or been too stressed leading into the trip. Or “d”, all of the above, or “e” any of the above. That’s just the way of it.

I’ve been hit with it twice. Once on Colorado’s Longs Peak and once on Mount Whitney a few years ago. Both times, I can see the string of reasons behind it. Stress. Insufficient water. Questionable food choices. Didn’t sleep well the night before. Not enough acclimation. On Longs Peak it didn’t hit until the way back down. On Whitney, it hit fast and hard on the way up and forced me to turn back before reaching the summit.

The only cure for altitude sickness is to drop in elevation. In both cases, once I descended below 12,000 feet I lost symptoms within a few minutes. In both cases, I felt like a new man. On Whitney, if the clock hadn’t been against me I would have resumed the upward march.

What I learned after the Whitney hike is that I had suffered a lower back compression fracture in a surfing accident two weeks before. So, not only were my “systems” out of whack, my structure was compromised. My physical body was not able to perform up to expectations. Two little disks that should have been more or less square on the x-ray were somewhat squashed on one side.

The surfing accident is a whole story in itself. I was at an unfamiliar break- Pacific Beach in San Diego- and while paddling into a wave became concerned that it was too big and that I didn’t have the capability to ride it well. By the time I made the decision to pull back I was too far in and ended up getting “sucked over the falls” and slammed on to the shallow sandy bottom. I knew immediately that things weren’t right and managed to get myself out of the water. I was stunned and disoriented but not enough to warrant medical attention on the spot.

The funny thing with that wave was that I would have likely gone uninjured if I had stayed the course and gone with it- another life lesson. Sometimes the risk or downside of pulling back is more then the downside of riding it out.

In any event, I was injured. I spent a few days recuperating, went to the chiropractor (but didn’t get x-rayed), and took it easy. I had already purchased the permits for Whitney and was organizing about ten other guys for the trip and felt obligated to go ahead with it. By the time hike day came around I was still stiff, had a hard time lifting my right leg, and was in varying degrees of pain most of the time. Off I went.

I did complete the Whitney trip this last year with two good friends. It felt good to close that loop.

When things at home or work start to unravel, systems are out of whack, structure is compromised, perhaps it's time to step back and take stock... "What are the contributing factors here?"

I’ve had a couple of great conversations lately on the subject of accountability and am curious.

To many … “accountability” is something that “I” hold “you” to. In other words, I hold you accountable… for some action or agreement.

Another way to look at accountability is to ask, “Who is it that I hold myself accountable to?” which seems far more accountable!

The idea of accountability is “to account for”… so, as a supervisor or a leader, I might do better to inspire others to hold themselves accountable to me. To account for their actions, their performance, their successes and struggles.

Often times, when we’re talking about new commitments or agreements, we talk about “who will you ask to hold you accountable?” I think the better question is, “who will you hold yourself accountable to?”

What do you think?
Posted by Vince Corsaro at 12:20 AM

Maybe I am unusual, but there are times when I get really curious about how others perceive me, or what they value about me, or what I bring into their life.

I was skiing a while back with a guy and on the chairlift he shared two great questions that he had asked people within his circle as part of an exercise to gain greater understanding of himself. Here they are:

1. What shows up when I come into the room?
2. What was I doing when you have noticed me most energized, or “in the zone”?

I like both of these because they call me as the answerer into a level of observation that is both unusual and profoundly illuminating! Give it a whirl.

Get your OARRs in the water 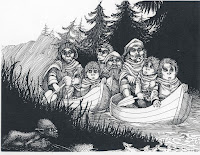 20 years ago I attended a course on “graphic facilitation”. What stuck for me was the idea of “OARRs”… as in, the things that need to get back in the water when group performance flags. I’d give credit to the instructors of the course, but I have no idea 20 years later who they are… so please forgive me. Pressing on…

All relationships and all groups have issues. We can hide, ignore, or deny it. Or, we can address them. An issue is anything that drains energy from the relationship or the group. The OARRs acronym provides a simple tool for where to look FIRST to plug the drain and get back on track.

Outcomes: Are we clear on the desired outcomes in this relationship? For this group? Where are we headed? What’s important here? Why are we together? How does this current behavior move us toward our desires?

Agenda: Is there clarity on what we are doing and when? Is the calendar a moving target or an agreed upon plan? How are we doing? Are there competing or unstated agendas?

Rules: Have we clarified guidelines and expected behaviors with one another? For example, have we defined what “on time” looks like? Have we defined “confidentiality”? Are we clear on how we expect to treat one another?

Roles: Is this a one-person-does-all group or relationship? What other roles are defined? What agreements are in place? How are we each taking 100% responsibility for our part in the relationship? Our role in the group?

I could come up with a dozen more questions. The Big Idea here is that too often when groups start to disintegrate we want to find a villain or a scapegoat or someone to blame. Getting our OARRs back in the water gives us a tool to look at the systems and structure that might be contributing to our downfall.

NOTE: Within 8 hours of posting this, I learned that Dave Sibbett of Grove Consultants International in San Francisco (www.grove.com) was the originator of the OARRs idea. So, thanks Dave!
Posted by Vince Corsaro at 9:10 AM

Several weeks ago a friend electronically introduced me to a woman and suggested that we meet for coffee. I called her and left a message. She called me back and left a message. I sent her a note asking if it would be okay to just use email to schedule. She said yes and after a couple rounds we agreed on a date, time, and place. Her confirming note said “let’s remind each other the day before…” which was about two weeks from then.

So, the day before, in between a flight and a dinner meeting, I dropped her a quick note confirming the meeting time for the next day.

I arrived home at midnight to a blistering email from her that my lack of communication in the intervening 10 days was unacceptable and offensive, cold, business like and well short of the target if I was hoping to meet the “woman of my dreams”. Yikes!

Two old tapes immediately began to roll… “Vince, you don’t love well,” and “If a woman is upset, you must have done something wrong.” But then, I stopped. And took a breath.

And then, some new tapes began to roll… “Huh. Isn’t it interesting that she has found that my way of communicating doesn’t work for her. Certainly happy to discover that sooner than later!” It was one of those “just because she has said I screwed up doesn’t mean I screwed up…” moments.

The long and short of it is that I sent her a brief note back affirming her desire to connect with a guy who communicates in a certain way, and that my choice was to pass on any effort to “make it right” as she had offered. It wasn’t about her being right and me being wrong, or vice versa.

When we notice that the old tapes are beginning to roll… for whatever reason… it’s almost always a good opportunity to stop and take a look at the data. To move from the story we start to make up and the emotion of the moment and instead look at the recordable facts and the inarguable truths. To look for our part in the dynamic. To discover the interesting nugget. To get curious and load up a new tape grounded in maturity and choice.

Yikes. I just finished 7 back to back retreats and 1:1 coaching visits in 7 days, including three full days of Colorado bumps, groomers and a little powder. I’m whupped.

A late morning and coffee in my jammies. Wander a bit on the keyboard. Workout later... perhaps a run on the beach if the weather cooperates. Clean out the moldy fridge and restock. Dinner tonight with a good friend to unpack and debrief.

Thanks for asking!
Posted by Vince Corsaro at 8:16 AM

I just finished an Executive Team Retreat. I love this group and have been walking with them for a couple of years. I was asking myself, “What is it that I appreciate about this team?”

I appreciate their willingness to go personal. The team has adopted the notion that we’re all just folks and there just isn’t any shame in the rough and tumble realities of life.

I appreciate their willingness to go vulnerable. It’s okay to acknowledge a weakness. It’s okay to say that something isn’t “great”. It’s okay because they are willing to hold themselves accountable- which is far more effective than being held accountable. You know what I mean?

I appreciate their willingness to appreciate. It happens spontaneously.

My dad just checked in to a Skilled Nursing Facility last week. He’s been on the decline for about five years. It's a nice place. New. Clean. Engaged staff.

So, the story I’m making up is that the new manager had come forth with a new edict and the frontline was going to (somewhat begrudgingly) comply. They were told what they were to do and they were doing it.

My desire as a leader is to build ownership over compliance. Better that the staff had spent the few minutes to talk about… “What is the atmosphere we desire in the dining room?” “How might we create that?” "What are some other options?" “Are we in agreement?”

When I tell someone what to DO, I might get compliance. When I invite someone to provide leadership toward an agreed upon outcome, a new owner is born.