Up all night inventing the Camcorder? 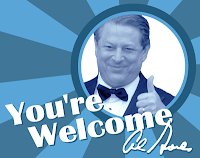 Back in the day Al Gore was quoted as saying "I invented the Internet."  The media grabbed it and was poised to have a field day.  That he did not exactly say it was irrelevant.  It became an overnight lightening rod to skewer his annoyingly arrogant persona.

The expected move here would have been for Gore to defend himself.  To explain that he had been mis-quoted, to apologize for a mis-speak, to back pedal and correct his statement.

But that's not what he did.  His response was:

"I was pretty tired when I made that comment because I had been up very late the night before inventing the camcorder."


What's brilliant about that?

It's the counter-intuitive move.  He took the accusation "you're annoyingly arrogant"  and over-owned it.  With no defense, he made fun of his own arrogance.  And, it stopped the media in its tracks.  He skewered the story.

What can I learn here?

The importance of the counter-intuitive move.  When I am feeling accused, I can get curious and consider that there is possibly some truth in the accusation.  It wouldn't sting if there wasn't!  And then, I can own it.  I can let myself (and my audience) know that the accusation has no sting because it's something I've already dealt with.  I know myself and I've got this one.  Next.

When I first came out many years ago, I was terrified of the "gay accusation" from any group I was working with.  I was unsure of myself and unsure how to respond.  Over time, I worked my insecure edge and today it has no power over me.  And occasionally, I will toss some stupidly stereotypical comment into the mix... "If you think that was gay wait until you see the matching napkins and flower arrangements."  Because, I've learned that those who are compelled to comment about my sexuality are doing so often from some insecure place in themselves.  And that's their stuff.  And, that's okay.  I'm here to help with that.

What accusation are you defending yourself from?  What part of it might you own?  What might be the counter-intuitive move?

Posted by Vince Corsaro at 9:13 AM